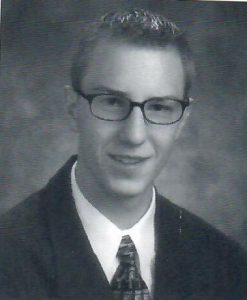 Dan played three sports all four years while at Normandy. He earned a total of Ten Varsity Letters during those four years.

Dan was on the Cross Country team and lettered three years. He was a member of three Conference Championship teams. Dan was a two time Lake Erie League MVP. He was a Team Captain his senior year.

As a member of the Swimming & Diving team, Dan lettered three times. He participated both as a swimmer and a diver. He was a Team Captain his senior year.

Dan earned four varsity letters as a member of the Track & Field team. He served as a Team Captain his senior year. He was a Lake Erie League MVP in 2003. Dan qualified for the Regional Meet once in the 3200. He led the Invaders to a Championship at the Bell Invitational in 2003.

Dan earned a Bachelor’s Degree from the College of Wooster in 2007.

In 2008, he moved to the Washington D.C. area. He works in IT, having been a systems analyst in the areas of environmental conservation, banking, finance, and education.

He married Elizabeth in 2011, their son Charles was born in 2015, and their second son is due at the end of this year.