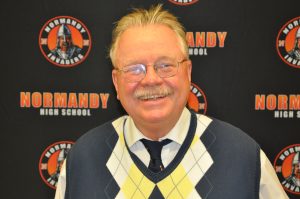 Jerry Vilinsky began his career in education in the Parma City School District as a math teacher in 1969.

Prior to coming to Normandy, Jerry coached multiple sports including football, basketball, and baseball.

Jerry came to Normandy in 1988 where he served briefly as Athletic Director. He taught math until his retirement in 2004. In addition to coaching golf for 15 years, he also coached football, baseball, swimming, and tennis.

Jerry has been happily married to his wife, Shirley, for 48 years. She worked as a speech pathologist for twenty years. They have two children, Leah and Drew, who both followed in their father’s footsteps and became educators. Leah graduated from Toledo, while Drew has degrees from St. Louis University and Notre Dame.

Jerry is a resident of North Royalton, Ohio during the summer months and resides in Sun City Center, Florida during the winter.

During his time at Normandy, Jerry often made references about the Ohio State rivalry with the “Team Up North.” One of his favorite quotes comes from legendary Coach Woody Hayes, which is “You win with good people”. Jerry certainly did his share of winning while at Normandy with Ten Winning Seasons.

Jerry enjoys his retirement playing golf and spending time with his family.